We may already have a Captain America, but I think being Captain of Marvel definitely trumps all.

The Synopsis
Skrull, a dangerous shapeshifting race has infiltrated a neighbouring planet where a Kree asset is hiding. A rescue mission by a group of elite Kree warrior heroes turns into one of their own being taken.

Vers (Brie Larson) is put through the paces as her mind is invaded by Skrulls who are in search of information only she harbours. Unfortunately, with no memory of her past, she doesn’t know what secret she’s keeping and can’t tell fact from fabrication.

Things go from bad to worse when Vers accidentally lands on Earth, with the Skrulls in hot pursuit. While she awaits extraction from her commander Yon-Rogg (Jude Law), she teams up with Fury (Samuel. L Jackson) and opens his eyes to the dangers lurking just beyond the clouds.

A journey of discoveries for Vers, she seeks not only to recover her memory but to remind herself of what kind of woman she is and has always been – with or without the power coursing through her veins.

The Good
It has to be said that the opening tribute to Stan Lee was a beautiful work of art. I doubt they’ll keep it going forward but it stood as a wonderful and fun reminder that he was the father of the Marvel Universe that we all know, love, or love to hate.

I liked that Captain Marvel also gave us the Avengers origin story that we never asked for. Rewinding back to a 90’s Nick Fury – with both eyes intact – we got to see a very different man (I don’t just mean because of the de-aging CGI number) in terms of personality, and observed as he came to terms with the knowledge of potential outside threats to Earth.

Jude Law has come so far as an actor and I think he’s really found his stride is his latest roles and Captain Marvel was no exception. Just a note, as I don’t want to give anything away.

The sense of female empowerment was subtle but managed to do its job through Captain Marvel. In this day and age, it’s impossible for “feminism” not to be a topic, especially with a female lead – and I have to admit; I felt pretty damn inspired to keep fighting after coming out of the cinema.

Personally, I found the pace of this movie a lot slower compared to other movies in the Marvel Cinematic Universe, but once I got into its stride it was nice to sit back. It’s the calm before the storm that is Avengers: Endgame, and we’re all going to need our wits about us for that one.

The Bad
I had no feelings about Brie Larson being cast as the titular character, and after watching the movie… I still don’t know how I feel. At times her character felt a little too indifferent or blase about her situation to the point that it bordered on her lacking a personality.

Sure she was supposed to be “funny” and there were a few quick-witted and dry humoured moments, but the odd one-liner, a characteristic does not make.

However, even with the above being said, Brie Larson’s Vers didn’t offend – I just feel like I’m still trying to work out what they were going for.

There were a couple of plot holes in the movie – or I should say more accurately; loose ends that I didn’t feel were fully tied up.

A lot went on and at the same time it didn’t seem like they focused on things that were actually important; who are the Kree? What is it that they have against the Skrulls? Who/What is Intelligence? Did they want Vers or did they want the power source? Did I miss all of this by not watching Guardian’s of the Galaxy II?

Strange though, is that these questions and plot holes plagued me as soon as I left the cinema, but now they seem insignificant. 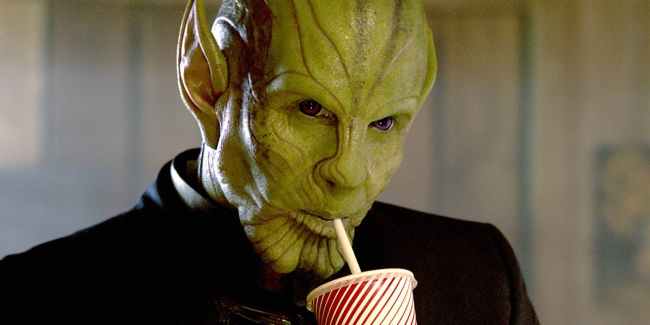 The Conclusion
There was a nice hint into what a second movie could end up being about which I thought was set up organically – even though a lot of us film fanatics can read the signs pretty easily.

A nice movie to whet our appetite in prep for Avengers: Endgame. It will be interesting to see who Vers/Carol has become in the twenty-five odd years that have passed, as well as those from her past.

I wouldn’t go as near as saying that Captain Marvel was the best in the franchise, but of course, the movie is more than an “Avengers: Endgame prequel” and so in its own right; though I am debatably still on the fence about the movie (can you tell) – I did have a good time watching it.